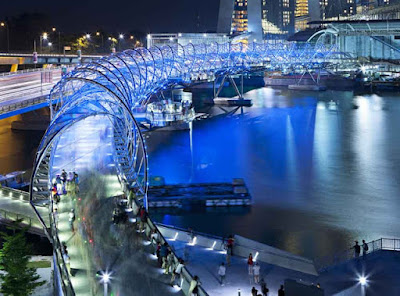 The Helix Bridge, Singapore, designed by Cox Rayner Architects, Australia and Architects 61 Pte, Singapore, has won the 'World's Best Transport Building' award at the prestigious World Architecture Festival Awards (WAF Awards) 2010, which is being held at the Centre Convencions International Barcelona (CCIB) from 3 Nov to 5 Nov 2010. It was chosen by some of the world's most distinguished architects and renowned industry experts, beating off competition from a shortlist of 3 entries. The judges felt that The Helix Bridge, designed by Cox Rayner Architects and Architects 61 Pte, was a strong winner due to the uniqueness of its weaving of structure and form. The judges said: "The structure, which is derived from its ability to curve in plan and section due to its helical form, will become an important addition to the pedestrian experience in Singapore both in daytime and at night. The scale for the pedestrian is very important with viewing pods integrated in the solution, providing opportunities for informal gatherings." Named after its structure and form, The Helix Bridge is designed to respond to its setting at the opening of the Singapore River to Marina Bay, a large inner harbour on which much of the city is now focused. To accentuate the ribbons of the structure, LED lighting is incorporated along its two spirals, whilst a series of ovular-shaped cantilevered 'pods' extending out onto the bay side create 'ring-side' viewing at water events for up to 100 people each.

This video (taken on 10th Sep 2010) captures the surrounding scene shots, travelling from Marina Bay Sands towards the Youth Olympic Park. Take a virtual walk with me on the Helix and enjoy the surrounding views ....
DNA-inspired: World's first curved double helix bridge at Marina Bay. The Helix Bridge , previously known as the Double Helix Bridge , is a pedestrian bridge linking Marina Centre with Marina South in the Marina Bay area in Singapore. It was officially opened on April 24, 2010 at 9 pm. The entire bridge was opened on July 18, 2010 to complete the entire walkway around Marina Bay. The design consortium is an international team comprising Australian architects the Cox Group and engineers Arup, and Singapore based Architects 61. Canopies (made of fritted-glass and perforated steel mesh) are incorporated along parts of the inner spiral to provide shade for pedestrians. The bridge has five viewing platforms sited at strategic locations which provide stunning views of the Singapore skyline and events taking place within Marina Bay. At night, the bridge will be illuminated by a series of lights that highlight the double-helix structure, thereby creating a special visual experience for the visitors. Pairs of coloured letters c and g, as well as a and t on the bridge which are lit up at night in red and green represent cytosine, guanine, adenine and thymine, the four bases of DNA.The Helix is fabricated from approximately 650 tonnes of Duplex Stainless Steel and 1000 tonnes of carbon steel used in the temporary structure and also helping the bridge to get the helix shape.The Land Transport Authority claims it is a world first in architectural and engineering bridge design.The construction of the bridge was undertaken by the collaboration by Sato Kogyo Pte Ltd and TTJ Design and Engineering Pte Ltd.
(extracts from Wikipedia)

It's 280 meters long, made of a special stainless steel, was lovingly assembled over two years with great precision and is already being touted as an architectural marvel and engineering feat. Officially named "The Helix," the sweeping, curving structure is the world's first double helix bridge and joins CNNGo's list of 24 of the world's most amazing bridges.

The bridge is located just beside the floating platform at Marina Bay, and allow pedestrians a direct link to the integrated resort. At its entrance is Singapore's first art park -- the Youth Olympic Park -- which opened at the same time as the bridge, and alongside it is the vehicular bridge to the casino resort, called Bayfront Bridge.

Designed by Australian firm Cox Group, engineering firm Arup and Singapore-based Architects 61, the bridge is made up of a major and minor steel helix that wind around each other. The bridge has five viewing platforms spanning across the entire length which provide great views of the Singapore skyline and events taking place within Marina Bay. It also functions as a outdoor gallery where children's paintings and drawings are exhibited for public viewing.

A interesting and detailed article on structure and software used in building this bridge can be found at http://www.structuremag.org/article.a...