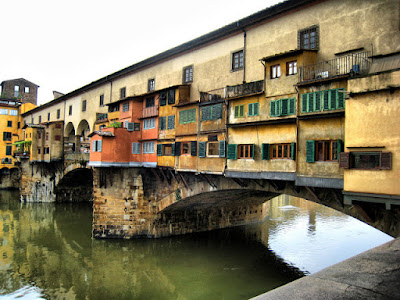 
The Ponte Vecchio is a Medieval stone closed-spandrel segmental arch bridge over the Arno River, in Florence, Italy, noted for still having shops built along it, as was once common. Butchers initially occupied the shops; the present tenants are jewelers, art dealers and souvenir sellers. The Ponte Vecchio's two neighbouring bridges are the Ponte Santa Trinita and the Ponte alle Grazie. The bridge spans the Arno at its narrowest point where it is believed that a bridge was first built in Roman times, when the via Cassia crossed the river at this point. The Roman piers were of stone, the superstructure of wood. The bridge first appears in a document of 996. After being destroyed by a flood in 1117 it was reconstructed in stone but swept away again in 1333 save two of its central piers, as noted by Giovanni Villani in his Nuova Cronica. It was rebuilt in 1345, Giorgio Vasari recorded the tradition in his day, that attributed its design to Taddeo Gaddi, besides Giotto one of the few artistic names of the trecento still recalled two hundred years later. Modern historians present Neri di Fioravanti as a possible candidate. Sheltered in a little loggia at the central opening of the bridge is a weathered dedication stone, which once read Nel trentatrè dopo il mille-trecento, il ponte cadde, per diluvio dell' acque: poi dieci anni, come al Comun piacque, rifatto fu con questo adornamento. The Torre dei Mannelli was built at the southeast corner of the bridge to defend it. The bridge consists of three segmental arches: the main arch has a span of 30 meters (98 feet) the two side arches each span 27 meters (89 feet). The rise of the arches is between 3.5 and 4.4 meters (11½ to 14½ feet), and the span-to-rise ratio 5:1. It has always hosted shops and merchants who displayed their goods on tables before their premises, after authorization of the Bargello (a sort of a lord mayor, a magistrate and a police authority). The back shops (retrobotteghe) that may be seen from upriver, were added in the seventeenth century.
It is said that the economic concept of bankruptcy originated here: when a money-changer could not pay his debts, the table on which he sold his wares (the "banco") was physically broken ("rotto") by soldiers, and this practice was called "bancorotto" (broken table; possibly it can come from "banca rotta" which means "broken bank"). Not having a table anymore, the merchant was not able to sell anything. During World War II, the Ponte Vecchio was not destroyed by Germans during their retreat of August 4, 1944, unlike all other bridges in Florence. This was allegedly, according to many locals and tour guides, because of an express order by Hitler. Access to Ponte Vecchio was, however, obstructed by the destruction of the buildings at both ends, which have since been rebuilt using a combination of original and modern design. In order to connect the Palazzo Vecchio (Florence's town hall) with the Palazzo Pitti, in 1565 Cosimo I de' Medici had Giorgio Vasari build the Vasari Corridor above it. To enforce the prestige of the bridge, in 1593 the Medici Grand Dukes prohibited butchers from selling there; their place was immediately taken by several gold merchants. The corporative association of butchers had monopolised the shops on the bridge since 1442. A stone with an inscription from Dante (Paradiso xvi. 140-7) records the spot at the entrance to the bridge where Buondelmonte de' Buondelmonti was murdered on behalf of the Amidei, in 1215, initiating the urban fighting of the Guelfs and Ghibellines. Along the Ponte Vecchio, there can be seen many padlocks affixed in various places, especially to the railing around the statue of Benvenuto Cellini. This is a recent tradition for the Ponte Vecchio, although it has been practiced in Russia and in Asia before. It was perhaps introduced by the padlock shop owner at the end of the bridge. It is popularly connected to idea of love and lovers: by locking the padlock and throwing the key into the river, the lovers became eternally bonded. This is an example of the negative impact of mass tourism: thousands of padlocks needed to be removed frequently, spoiling or damaging the structure of the centuries-old bridge; however, it seems to have decreased after the city administration put a sign on the bridge mentioning a €160 penalty for those caught locking something to the fence. There is a similar ongoing padlock phaenomena at Ponte Milvio, due to one of Federico Moccia's books.
The bridge was severely damaged in the 1966 flood of the Arno.
The bridge is mentioned in the aria "O mio babbino caro" by Giacomo Puccini.